Iga Swiatek won the Italian Open on Sunday, defeating Ons Jabeur 6-2, 6-2 to maintain her championship and win her sixth event title in a row. Swiatek, the world number one, broke down in tears after winning her 28th match in a row, and she is the hot favourite for Roland Garros, which begins later this month. “I’m going to have a lot of tiramisu to celebrate!” Swiatek cracked a joke on the court before adding, “See you in the French Open.”

The 20-year-old Pole has only dropped one set in her previous 20 matches and cruised through Jabeur, ranked seventh in the globe, in a lopsided final in Rome.

Tunisia’s Jabeur made history last week when she became the first Arab or African woman to win a WTA 1000 championship, but she was unable to extend her career-high 11-match winning run against her tenacious opponent.

“We’ve had a tremendous run on clay… we’ll learn from this match and go on,” Jabeur remarked.

Swiatek came out firing, and after winning the first three games, came near to winning the fourth, failing to capitalize on two break opportunities before Jabeur finally scored.

Fans on the court were hoping for another comeback like her exploits in the quarter- and semi-finals, but by the time she began to show signs of life, she was already too far behind.

Jabeur then enthralled the fans by winning the following two games, and another unexpected comeback bid appeared to be in the works when she faced three break opportunities in game seven.

Swiatek, on the other hand, brought the game to deuce and saved another break point in a spectacular rally before winning the game, shattering Jabeur’s determination, and going on to win the title.

Later that day, Novak Djokovic would meet Stefanos Tsitsipas in the men’s final, a rematch of last year’s French Open final, which was a five-set thriller won by the Serb.

Djokovic has already secured that he will be world number one for a record-extending 370th week, and he won his 1,000th career match on Saturday night against Casper Ruud to reach the final. 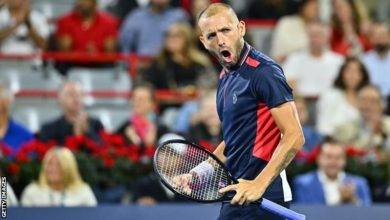